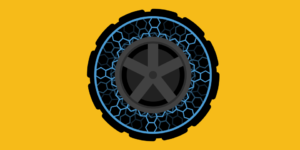 How It Works: Airless tires

Although tires are what you see, your vehicle is actually riding on the air inside of them. That air supports the tire, keeps it on the rim, and cushions the ride.

Of course, if air goes in, it can also come out. That’s most obvious when something like a nail penetrates the tire and causes a flat, but tires are naturally porous and gradually lose a bit of air over time. Even if tires don’t look low, you should check their pressure once a month or so. A low tire will use more fuel, and can wear unevenly and need replacing sooner than one with the correct pressure.

Unlike a regular tire, the Vision is created with a 3-D printer, constructed with an internal honeycomb web instead of an air chamber.

Bridgestone has also been developing an airless tire, and recently announced that the design may go on sale for bicycles in 2019. Hankook Tire is also working on an airless model.

Airless tires certainly aren’t new. Wagons and early cars used wheels edged with metal bands or solid rubber. Scottish engineer Robert William Thomson invented a pneumatic rubber tire and patented it in 1845, but it was too expensive to be viable. John Dunlop came up with a successful one for bicycles in 1888, and seven years later, brothers André and Edouard Michelin created one for automobiles.

Solid rubber tires are still made, but they’re primarily used for low-speed, heavy-duty applications, such as on construction equipment or forklifts, or for lighter-duty use on lawn mowers, trailers and golf carts. On a car, they’d add too much weight and, without that cushion of air, they would transmit every bump and produce a very stiff ride.

In 2005, Michelin introduced an airless tire concept called the Tweel. The design combined the tire and wheel into a single unit, with a central rigid hub, an outer tread, and spokes in between. The polyurethane spokes were firm enough to support the tire, but flexible enough that they absorbed road shock to provide a more comfortable ride.

The Tweel concept wasn’t adapted for car tires, but in 2015, Michelin launched it for commercial applications on golf carts, industrial lawn mowers, and skid-steer loaders.