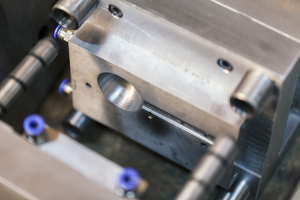 What is Injection Tooling?

In injecting molding processes, injection tooling consists of the metal mold and fixtures into which a material, such plastic, rubber or metal, is injected to produce parts. This tooling allows parts to be mass-produced at a relatively inexpensive per part cost. These parts are used in many industries, such as automotive, healthcare, and consumer goods. A bottle cap is an example of a part created from injection molded plastics.

Injecting tooling is complicated and expensive to make. Custom injection molding and tooling is designed and built by skilled workers. When designing the tooling, elements such as the part’s material thickness, part tolerance, the number of parts expected to be produced, and the injecting molding machine requirements are considered.

The injection tooling molds are commonly made from steel, which is usually a hardened or a pre-hardened steel. When small numbers of a part are expected to be produced, the mold might be made out of aluminum. Aluminum is less expensive than the steel, but it may not last as long. In situations in which the material to be used is sensitive to the heat generated in the injection molding process, beryllium-copper alloy may be used instead.

Read more: What is Injection Tooling?