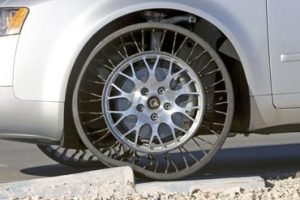 How the Tweel Airless Tire Works

For more than 100 years, vehicles have been rolling along on cushions of air encased in rubber. The pneumatic tire has served drivers and passengers well on road and off, but a new design by Michelin could change all that – the Tweel Airless Tire.

Michelin first announced the Tweel in 2005. The name is a combination of the words tire and wheel because the Tweel doesn’t use a traditional wheel hub assembly. A solid inner hub mounts to the axle. That’s surrounded by polyurethane spokes arrayed in a pattern of wedges. A shear band is stretched across the spokes, forming the outer edge of the tire (the part that comes in contact with the road). The tension of the shear band on the spokes and the strength of the spokes themselves replace the air pressure of a traditional tire. The tread is then attached to the shear band. The Tweel looks sort of like a very large, futuristic bicycle wheel.

The parts of a Tweel Airless Tire.

When the Tweel is put to the road, the spokes absorb road impacts the same way air pressure does in pneumatic tires. The tread and shear bands deform temporarily as the spokes bend, then quickly spring back into shape. Tweels can be made with different spoke tensions, allowing for different handling characteristics.

More pliant spokes result in a more comfortable ride with improved handling. The lateral stiffness of the Tweel is also adjustable. However, you can’t adjust a Tweel once it has been manufactured. You’ll have to select a different Tweel. For testing, Michelin equipped an Audi A4 with Tweels made with five times as much lateral stiffness as a pneumatic tire, resulting in “very responsive handling”

Michelin reports that “the Tweel prototype… is within five percent of the rolling resistance and mass levels of current pneumatic tires. That translates to mean within one percent of the fuel economy” of the tires on your own car. Since the Tweel is very early in its development, Michelin could be expected to improve those numbers.

A pneumatic, or air-filled, tire is made of an airtight inner core filled with pressurized air. A tread, usually reinforced with steel belting or other materials, covers this inner core and provides the contact area with the road. The pressure of the air inside the tire is greater than atmospheric air pressure, so the tire remains inflated even with the weight of a vehicle resting on it. The tire’s air pressure provides resistance against forces that try to deform the tire, but it gives to a certain degree -a cushioning effect as the tire hits bumps in the road. If you’ve ever taken a ride in an old-fashioned carriage with wooden wheels, you know what a difference a pneumatic tire makes.

Pneumatic tires do have drawbacks, especially in high-performance or highly dangerous applications. The main problem, of course, is that a puncture of the tire results in total failure. A blowout at high speeds can lead to a dangerous car accident. Military planners are concerned with tires getting blown out by gunfire or explosion shrapnel. A vehicle crew’s worst nightmare is getting trapped in a fire zone because their tires are all flat. Obviously, an airless tire can’t be disabled by a single puncture.

Another problem with pneumatic tires involves variations in air pressure and tire performance. Lower tire pressure can create improved traction (and increased comfort), because the tires “flatten” slightly, placing more tread in contact with the road. However, the pressure inside the tire doesn’t just maintain “up and down” stiffness – it also maintains the lateral stiffness of the tire. Reduced air pressure allows the tire sidewalls to flex, which unfortunately results in poor handling. In an airless tire, tire stiffness in those two dimensions is independent.

Air pressure causes other problems, as well. Consumers are notoriously unreliable when it comes to setting their tire pressure properly, often resulting in unsafe situations. Pneumatic tires are also susceptible to changes in temperature, which can change the tire’s internal pressure.

The Future of Airless Tires

Tweel Airless Tires on the road.

The Tweel does have several flaws (aside from the name). The worst is vibration. Above 50 mph, the Tweel vibrates considerably. That in itself might not be a problem, but it causes two other things: noise and heat. A fast moving Tweel is unpleasantly loud. Long-distance driving at high speeds generates more heat than Michelin engineers would like.

Another problem involves the tire industry. Making Tweels is quite a different process than making a pneumatic tire. The sheer scale of the changes that would need to be made to numerous factories, not to mention tire balancing and mounting equipment in thousands of auto repair shops, presents a significant (though not insurmountable) obstacle to the broad adoption of airless tires.

Because of these flaws, Michelin is not planning to roll out the Tweel to consumers any time soon. “Radial tire technology will continue as the standard for a long time to come,” said Michelin’s press release touting Tweel development. They are initially working on Tweel use in low-speed applications, such as on construction vehicles. The Tweel is perfect for such use because the high-speed vibration problems won’t come into play, and the ruggedness of the airless design will be a major advantage on a construction site. Michelin is also exploring military use of the Tweel.

At a public demonstration of the Tweel, Michelin placed prototypes on the iBOT, a personal mobility device for physically impaired people, and the Segway Centaur, a four-wheeled ATV-type vehicle that uses Segway’s self-balancing technology.

The iBOT and Segway Centaur

Michelin isn’t the only company working on an airless tire design. Resilient Technologies is developing their own airless tire, known as the NPT (non-pneumatic tire). That company is using a more aggressive development and marketing strategy aimed at military use. The NPT is based on a different configuration of spokes, but the general idea is the same as the Tweel.