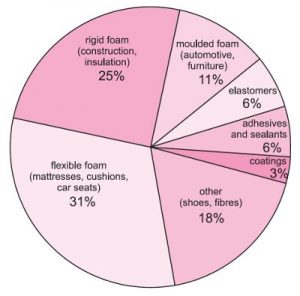 The polymeric materials known as polyurethanes form a family of polymers which are essentially different from most other plastics in that there is no urethane monomer and the polymer is almost invariably created during the manufacture of a particular object.

The group formed by the reaction between the two molecules is known as the ‘urethane linkage’.  It is the essential part of the polyurethane molecule.

The physical properties, as well as the chemical structure, of a polyurethane depend on the structure of the original reactants, in particular the R1 and the R2 groups.  The characteristics of the polyols – relative molecular mass, the number of reactive functional groups per molecule, and the molecular structure – influence the properties of the final polymer, and hence how it is used.

There is a fundamental difference between the manufacture of most polyurethanes and the manufacture of many other plastics.  Polymers such as poly(ethene) and poly(propene) are produced in chemical plants and sold as granules, powders or films.  Products are subsequently made from them by heating the polymer, shaping it under pressure and cooling it.  The properties of such end-products are almost completely dependent on those of the original polymer.

Polyurethanes, on the other hand are usually made directly into the final product.  Much of the polyurethanes produced are in the form of large blocks of foam, which are cut up for use in cushions, or for thermal insulation.  The chemical reaction can also take place in moulds, leading to, for example, a car bumper, a computer casing or a building panel.  It may occur as the liquid reactants are sprayed onto a building surface or coated on a fabric.

The combined effects of controlling the polymer properties and the density lead to the existence of a very wide range of different materials so that polyurethanes are used in very many applications (Table 1).
Some examples of the main reasons for choosing polyurethanes as shown in Table 1.

Table 1  Properties and uses of polyurethanes.

Polyurethanes can be rigid or rubbery at any density between, say 10 kg m-3 and 100 kg m-3.  The overall range of properties available to the designer and the manufacturer is clearly very wide and this is reflected in the many, very different, uses to which polyurethanes are put.

(a) Production of isocyanates

Although many aromatic and aliphatic polyisocyanates exist, two are of particular industrial importance.  Each of them has variants and together they form the basis of about 95% of all the polyurethanes. They are:

TDI was developed first but is now used mainly in the production of low density flexible foams for cushions.

The mixture of diisocyanates known as TDI consists of two isomers:

The starting material is methylbenzene (toluene). When it reacts with mixed acid (nitric and sulfuric), two isomers of nitromethylbenzene (NMB) are the main products.

If this mixture is nitrated further, a mixture of dinitromethylbenzenes is produced. In industry they are known by their trivial names, 2,4-dinitrotoluene and 2,6-dinitrotoluene (DNT). 80% is 2,4-DNT and 20% is 2,6-DNT:

The mixture of dinitrobenzenes is then reduced to the corresponding amines:

In turn, the amines, known commercially as Toluene Diamines or TDA, are heated with carbonyl chloride (phosgene) to produce the diisocyanates and this process can be carried out in the liquid phase with chlorobenzene as a solvent at about 350 K:

Alternatively, these reactions are carried out in the gas phase by vaporizing the diamines at ca 600 K and mixing them with carbonyl chloride.  This is an environmental and economic improvement over the liquid phase process as no solvent is needed.

It is expensive to produce this mixture in different proportions.  It means purifying the mixture of the nitromethylbenzenes, NMB, by very careful distillation.

It is more fruitful to produce different properties in the polyurethanes by using different polyols which react with the 80:20 mixture of TDI to produce the polymers.

MDI is more complex and permits the polyurethane manufacturer more process and product versatility.  The mixture of diisocyanates is generally used to make rigid foams.

The starting materials are phenylamine (aniline) and methanal (formaldehyde) which react together to form a mixture of amines, known as MDA (methylenedianiline).  This mixture reacts with carbonyl chloride (phosgene) to produce MDI in a similar way to the manufacture of TDI. MDI contains the following diisocyanates:

The term MDI refers to the mixture of the three isomers in Figure 3.  They can be separated by distillation.

(b) Production of polyols

The choice of polyol, especially the number of reactive hydroxyl groups per polyol molecule and the size and flexibility of its molecular structure, ultimately control the degree of cross-linking between molecules.  This has an important effect on the mechanical properties of the polymer.

An example of a polyol with two hydroxyl groups (ie a long chain diol) is one made from epoxy-propane (propylene oxide), by interaction with propane-1,2-diol, (which itself is formed from epoxy-propane, by hydrolysis):

An example of a polyol which contains three hydroxyl groups is produced from propane-1,2,3-triol (glycerol) and epoxypropane:

which may be represented as this idealised structure:

Soya bean oil contains triglycerides of long chain saturated and unsaturated carboxylic acids, which, after hydrogenation, can, on reaction with epoxypropane, form a mixture of polyols suitable for the manufacture of a wide range of polyurethanes.  The use of these biopols means that at least part of the polymer is derived from renewable sources.

If the polyol has two hydroxyl groups and is mixed with either TDI or MDI, a linear polymer is produced.  For example, a linear polyurethane is produced by reaction with a diisocyanate and the simplest diol, ethane-1,2-diol, a condensation polymerization occurs:

A much used polyurethane is made from TDI and a polyol derived from epoxypropane:

If the polyol has more than two reactive hydroxyl groups, adjacent long-chain molecules become linked at intermediate points.  These crosslinks create a stiffer polymer structure with improved mechanical characteristics which is exploited in the development of ‘rigid’ polyurethanes.  Thus a diisocyanate, such as MDI or TDI which reacts with a polyol with three hydroxyl groups, such as one derived from propane-1,2,3-triol and epoxyethane, undergoes crosslinking and forms a rigid thermosetting polymer.

As well as polyisocyanates and polyols, the manufacture of polyurethanes needs a variety of other chemicals to control the polyurethane-forming reactions and to create exactly the right properties in the end-product.

All practical polyurethane systems include some, but not necessarily all, of those described in Table 2.
Table 2  Additives used in the manufacture of polyurethanes.

As an example, consider the manufacture of a moulded item that might otherwise be made from a thermoplastic polymer by injection moulding.  To make it of polyurethane, it is necessary to mix exactly the right masses of the two major components (polyisocyanate and polyol), which must be liquids.  The reaction starts immediately and gives the solid polymer. Depending on the formulation, the catalysts used and the application, the reaction is typically completed in between a few seconds and some minutes. In this time, therefore, it is essential to dispense the reacting liquid mixture into the mould and also to clean the combined ‘mixing and dispensing’ equipment ready for the next operation.  The exothermic chemical reaction is completed within the mould and the manufactured article can be taken from the mould immediately.

When the two liquids react, a solid polymer is formed. The polymer may be elastic or rigid.  However, it may also contain bubbles of gas so that it is cellular – a foam.

When producing a foamed polyurethane, there are two possible ways to generate a gas inside the reacting liquid mixture.  The so called chemical blowing uses water that may have been added to the polyol which reacts with some of the polyisocyanate to create carbon dioxide:

Alternatively (physical blowing), a liquid with a low boiling point, for example pentane, is mixed into the polyol.  The reaction is exothermic and so, as it proceeds, the mixture warms up and the pentane vaporizes.

A tiny amount of air is dispersed through the mixture of polyisocyanate and polyol.  This provides nucleation seeds for the multitude of gas bubbles that are produced throughout the polymer. Heat makes the bubbles expand until the chemical reaction changes the liquid to solid polymer, and the available gas pressure cannot create any further expansion.

A shoe sole, for example, may be ‘blown’ to double the volume of solid polymer.  This process is so versatile that the expansion can be taken much further. In low-density foams for upholstery or thermal insulation less than 3% of the total volume is polyurethane.  The gas has expanded the original volume occupied by the liquid by 30 to 40 times.  In the case of cushions, only just enough solid polymer is needed to ensure that we can sit comfortably.

In thermal insulation, it is the gas trapped in the cells which insulates.  The polymer that encloses the cells reduces the insulation efficiency, so it makes sense to have as little of it as possible.

In the final stages of the polyurethane-forming reaction, the mixture becomes a gel with very effective surface adhesion.  Hence polyurethanes can be used as adhesives.  Equally important is the fact that polyurethanes, which are being created as, for example, cushioning or insulation materials, can be bonded to surface materials without the introduction of separate adhesives. Adhesion