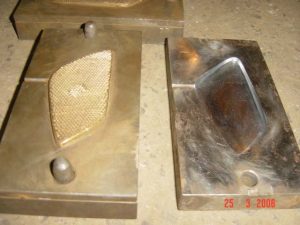 Because of its high viscosity, in order for plastic injection moulding to be successful melted polymer must be injected into a hollow mould with a large force.

Feeding the polymer resin (pellets) down to the auger (screw) is a large open-bottomed container. An electric (or hydraulic) motor is responsible for turning the auger inside a heated cylinder which feeds the pellets up through the grooves of the auger. A gate before the mold cavity restricts the flow of the melt into the mold and limits back flow. The pressure created by pushing the forward through the grooves up to the gate also produces heat on the inside of the cylinder which helps to melt the polymer and prepare it for injection into the mold.

Injection of Polymer Melt Into the Mould

As the auger moves forward it injects polymer melt into the mould at high pressure (typically 10,000 – 30,000 psi), holds it, and adds more melt to ensure the contraction due to cooling and solidification does not leave gaps in the final product. Eventually the gate solidifies and isolates the mould from the injection cylinder.

Moulds are typically air or water cooled. Sometimes small holes are bored into the mould that allow a cooling liquid (such as water) to be circulated. Injection mould cooling consumes about 85% of the cycle time for the entire process.

After solidification, the clamp holding the two halves of the mould together closed is opened allowing the part to be removed. The injection moulding process can then be repeated.

Injection Molding – How Plastic is Molded

Plastic has, quite literally, become the cornerstone of our society. We make so many things from plastic that it is hard to imagine what our lives would be like if it was never invented. With so many of our everyday products being made of plastic, it is easy to understand why plastic injection molding is such a huge industry.

Next is the actual injection of the melted plastic. The plastic usually begins this process as pellets that are put into a large hopper. The pellets are then fed to a cylinder; here they are heated until they become molten plastic that is easily forced into the mold. The plastic stays in the mold, where it is being clamped under pressure until it cools.

The next couple of steps consist of the dwelling phase, which is basically making sure that all of the cavities of the mold are filled with the melted plastic. After the dwelling phase, the cooling process begins and continues until the plastic becomes solid inside the form. Finally, the mold is opened and the newly formed plastic part is ejected from its mold. The part is cleaned of any extra plastic from the mold.

As with any process, there are advantages and disadvantages associated with plastic injection molding. The advantages outweigh the disadvantages for most companies; they include being able to keep up high levels of production, being able to replicate a high tolerance level in the products being produced, and lower costs for labor as the bulk of the work is done by machine. Plastic injection molding also has the added benefit of lower scrap costs because the mold is so precisely made.

However, the disadvantages can be a deal breaker for smaller companies that would like to utilize plastic injection molding as a way to produce parts. These disadvantages are, that they equipment needed is expensive, therefore, increasing operating costs.

Thankfully, for these smaller companies, there are businesses that specialize in custom plastic injection molding. They will make a mock up mold to the exact specifications, run it through the complete process and present the completed piece along with an estimate to complete the job to the customer.