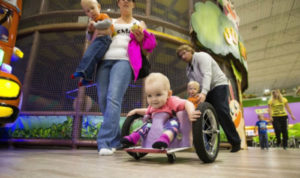 Evelyn Moore is 13-months old, paralyzed toddler who skilfully wheels her homemade wheelchair in an indoor playground in northeast

Edmonton, which she often visits with her mother, Kim Moore. Where other kids of her age, play around with tri-cycles, Evelyn moves around in the homemade wheelchair. She slowly figured out her way around the wheel chair, just like other kids take time and learn to crawl. The whiz kid

Kim put Evelyn on the make-shift chair when she was at 7-months old. “She really gets around now,” says Kim. “She went backwards first and then she went forwards, and then she figured out how to turn,” Moore says. “And now we have a speed bump in the middle of our living room because she just goes that fast.” as quoted on cbc.ca

Evelyn, fondly called as Eva by her family, was diagnosed with cancer after her four-month check up. Doctors came across a lump protruding from her spine, when a nurse noticed too much movements with toddler’s hips. Eva had to undergo eight rounds of chemotherapy, as her neuroblastoma tumour was on fourth stage an could not be removed.

However, the cancer is temporarily diffused as is in abeyance, but Eva’s parents had to reckon with their daughter’s permanent paralysis below arms. Eva is their first child and this news broke the parent’s heart. “But then you go home and you cry and you come back the next day and be the strongest mom and dad you can ever be.” says Moore.

Parents were informed by doctors that Eva will most likely be “army crawl,” pulling herself around with her arms, until she was about two. After that the kid can be moved to wheelchairs.

Kim, who wanted her daughter to have some sort of independence like other children of Eva’s age do. While she was surfing internet, Kim happened to stumble upon a ‘DIY baby wheelchair’ post on Pinterest and she asked her husband Brad to build it. Brad spend a night in garage working on it. He attached a second-hand Bumbo chair to a kitchen cutting board, then put caster wheels on the bottom and small wheels from a children’s bike.