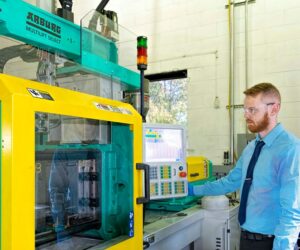 With Scientific Molding, two stages are used for forming the part: The first stage for getting most of the plastic into the part, normally 90% to 99.9% full by volume; and the second stage, to pack the part to replicate the steel cavity texture and shape. The second stage usually moves relatively little plastic in the cavity but it is critically important for surface finish, cosmetics, and part dimensions. Most molders work with two parameters for establishing the second stage—pressure and time. Within Scientific Molding we expand this to four factors:

1. Method of switchover from first to second stage.

2. Running the part with the gate sealed (frozen) or unsealed.

4. Pressure to pack the cavity properly.

Controlling the switchover from first to second stage is perhaps the most critical element of a molding process. It can make or break your process for high-quality parts and it is often the reason processors can not replicate parts from one machine to another. For most applications, switchover should be as short as possible, meaning a quick change from whatever pressure is at the end of first stage to the required pressure for second-stage pack and hold. You must know how the machine controller handles this switchover to set this up properly.

Transfer from first to second stage must be quick and consistent, so understanding how your press works is crucial to achieving the desired result.

The bottom line is that transfer from first to second stage must be quick and consistent. So understanding how your press works is crucial to achieving the desired result. The time from the end of first stage to the second-stage pressure setpoin should be less than 0.10 sec for proper process control with most parts. You don’t want any dips, spikes, oscillations, or gradual slide into second-stage pressure. Dips may allow the flow front to hesitate, which may cause underpacking or shorts. Spikes or a gradual slide into second-stage pressure at switchover will overpack the cavity and may cause flash. Oscillations often cause poor process consistency. Process-monitor graphs of injection pressure vs. time are usually the best way to evaluate your machine’s response.