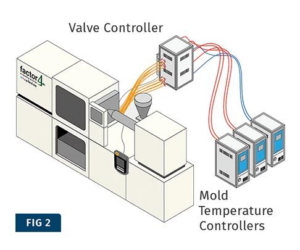 Hot/Cold Injection Molding: Which Approach Is Best for You?

Despite the many advances in injection molding technology, challenges remain in producing visually acceptable parts with high esthetic requirements, free of molded-in stress, and with high dimensional stability, as well as reliably filling thin walls with high flow lengths.

In the early 2000s, several Japanese companies collaborated in developing a molding technology that could satisfy the most stringent surface-quality requirements of their demanding electronic consumer-goods clients. In 2002, Ono Sangyo Co., a leading contract injection molder with a substantial processing technology department, introduced and patented the Rapid Heat Cycle Molding (RHCM) process. In 2009, Matsui Manufacturing Co., the leading plastics auxiliary equipment manufacturer in Japan, joined the RCHM alliance as a manufacturer of a controller for the process. This technology is based on steam as the cavity-heating medium and gained rapid acceptance among Asian consumer-electronics OEM’s.

During the following years, the technology became the default molding process for the production of flat-screen TV bezels, adopted by major brands like Sony and Samsung. Originally, these TV bezels were injection molded, painted, and subsequently clear coated. The RHCM process allowed for molding of TV bezels with molded-in color instead of paint, having a high-gloss surface and free from cosmetic defects such as visible sink marks and weld lines. This approach led to significant cost reductions by eliminating secondary operations and VOC emissions from painting and coating lines.

Despite its obvious and proven benefits, the technology was slow to gain acceptance in other end-user industries and geographical areas. It was not until late in the 2000s when several European companies entered the field and introduced alternative hot/cold molding technologies. (In Europe, the technology is commonly referred to as Variotherm, a widely used term that is a registered trademark of Hofmann Innovation Group in Germany.)

Read more: Hot/Cold Injection Molding: Which Approach Is Best for You?