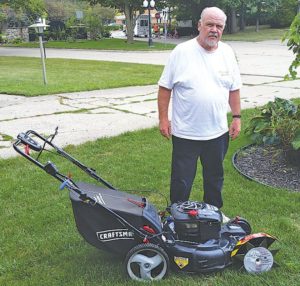 CLINTON TOWNSHIP — Thomas Francis is a Vietnam veteran who wants to make life easier for people near and far.

The 68-year-old Clinton Township resident received a gold medal at InventHelp’s INPEX — America’s largest invention trade show — in June in Pittsburgh, Pennsylvania, for his Shark Tooth Edger invention. It was part of the lawn-garden category. Awards were presented in 45 individual categories.

Francis’ lawnmower attachment is simple: An owner of a front-wheel drive mower just takes off one of the front wheels and attaches the eight-blade edger. The edger spins at around 300 revolutions per minute, limiting debris as well as the risk of injury for the user.

It’s easy to attach and disassemble, involving a set of screws. Also, it allows for homeowners to minimize the amount of lawn equipment — such as edgers or weed wackers — that take up space in sheds or garages.

Francis noted that most people only tend to edge lawns around three times per year. He has about six or seven invention patents in different areas, including one from years ago that would allow homeowners to waterproof their homes without the hassle of emptying their drainage systems. He thought of this edger a few years back.

Normally, he said, manufacturers sell approximately 17 million lawn edgers each year of different sizes, ranging in price from $65 to $350 depending on caliber. He believes this is why his product has been ignored by many manufacturers: It takes away from making easy money for the big brands.

He said that at the show in Pittsburgh, he met manufacturers from the U.S. and China who were interested in his invention. He found out that China can produce the Shark Tooth Edger for $9, or half of what it would cost to make it in the states.

“This is in the $65 bracket because it makes sense,” Francis said. “It works extremely well. … With the know-how we have in this country, we can put a weed wacker on the side of (a lawnmower), we can put an edger like I did, and you could do all jobs with one piece of equipment. And you wouldn’t have a packed garage.”

The idea for the high-carbon blade took him two years to figure out, mostly due to limiting the revolutions per minute. The blades, which are made in Iowa using agricultural-grade steel, are tempered and claim to last the life of a lawnmower.

“You’ll never wear them out,” he said.

He’s already spent roughly $100,000 on this invention alone, through patents, attorneys and the like. He’s tested about 36 of them over the past few years, and he even spent three years listening to manufacturers tell him they wanted to make the product here in America.