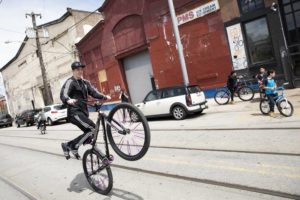 Teenagers are jumping on bicycles again. But parents hoping their children would get more exercise probably didn’t envision bike riding like this.

A specific kind of BMX riding is taking off among children and teens. It involves popping wheelies and riding in and sometimes against traffic, usually without helmets. The style, which some call bikelife, is growing despite decades of declines in bike riding among children.

BMX, which stands for bicycle motocross, includes everything from the hilly dirt-track races at the Olympics to trick-riding in parks or on the street. BMX bikes generally have a single gear and thick frames and tires.

Bikelife began in the streets of New York and Philadelphia and is spreading to other areas as riders post images of tricks and group rides on social media.

The Pied Piper is 25-year-old Harlem native Darnell Meyers, who has over 200,000 followers on his @RRDBlocks Instagram page and imitators as far away as Brazil and London. Mr. Meyers posts videos of himself and others doing tricks in New York traffic. His namesake move: riding with his front wheel up for block after block.

A bike messenger by day, Mr. Meyers knows that some of his riding is dangerous. He says a fall once knocked him unconscious while he rode in a park. He posts videos of wipeouts along with his feats to show young riders the risks.