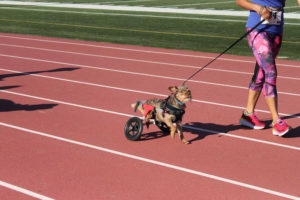 Mr. T is totally a tough guy, but in the cutest way possible.

He came to the Front Street Animal Shelter in Sacramento, California, paralyzed, but he wouldn’t let that minor detail stop him from getting around.

As you can see from this video, the 1-year-old dragged his back legs behind him with a big, bright smile on his face.

The kind folks at 3D Orthotics, LLC wanted to make life easier for Mr. T so they fashioned a custom-made wheelchair out of 3D-printed parts just for him.

He got his wheels on April 26, and maybe that’s where you think this story ends — but not a chance, he was just getting started.

“He adjusted super-fast. He has already done his first 5k race,” Karen Briley, the dog’s foster mom, tells PEOPLE. “He is such a happy and joyful dog.”

With the April 30 race already under his belt, Briley is hopeful that Mr. T will make even more strides as time goes on.

“Since I have received him he definitely has more movement in his legs and [is] able to stand assisted,” she says. “I’m hoping and praying with some physical therapy that he may be able to get some more movement and strength in the back legs.”