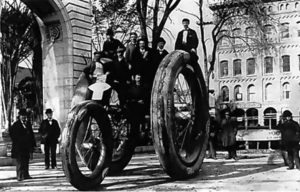 Since the wheel was created there has been a fascination with all things round. From wheels to gears to cogs and thimbles, the shape works wonders and certainly has allowed our ancestors to evolve with less labor and overall ease. As new inventions were created the wheel has been a factor in many cases, hence the need to build a better wheel.

During the latter part of the 19th century the early horseless carriages were beginning to develop, the earliest simply manufactured with wood or iron, round and supporting the body of the vehicle. As the popularity of these early automobiles developed even more the common complaint was similar to the age-old problem of avoiding the bumps, rocks and potholes to allow smooth passage. The roads were simply unpaved and in poor shape or in some cases they simply did not exist. Just years prior the roadways were used exclusively by horse, wagon, walking or with sleighs during the cold winter months. Yes, there was the opportunity to enhance the ride further and the great thinkers during this period were on the forefront.

During this time the pneumatic tire was invented and then improved upon time and again. The tire containing air provided the smoothest ride for the new automobiles and was an overnight success. The age-old wheel was back again and better than ever. As the twentieth century was approaching with a variety of new automobiles the tires containing air were standard, a luxury for travel over the old cobbled streets of our little town.

Businessmen far and wide seeking to sustain and grow their existing factories, ensuring survival and providing employment for those in need were intrigued. The big names of the day were capitalizing on the high demand for automobiles with pneumatic tires, regional and local companies were ready to move forward and capture bits and pieces of this new opportunity. The Abbott Downing Factory in Concord still made wagons and coaches, but they also started making trucks. A little company down in Massachusetts named Boston Woven Hose and Rubber Company decided to diversify and started manufacturing Vim tires in 1896, already possessing the material and talent to add this line of pneumatic tires to their already successful manufacturing plant.

Our friends at Boston Woven Hose and Rubber Company witnessed early success with the introduction of their pneumatic tires for automobiles and put thought into making rubber tires for other types of transportation. With much thought they decided to start production of bicycle tires, eliminating the bone-rattling wood and steel tires featured on bicycles during the latter part of the 1890s. The solid rubber was replaced with an inflatable tube and placed around a steel rim, when inflated with air the smooth ride was unimaginable, the pneumatic bicycle tire was here to stay and there was business on the horizon, lots of business.

With a solid new product line in bicycle tires the Boston Woven Hose and Rubber Company sought advertising for their bicycle tires, sales were good, word of mouth was certainly even better. They needed to create more avenues to promote their bicycle tires and they created a most amusing publicity stunt that served them very well that summer of 1896.