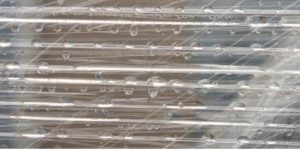 The Properties of Polyethylene

Polyethylene is a plastic material known technically as a thermoplastic. Thermoplastic means that when it is heated it turns to liquid rather than burning, and when cooled takes on the properties of a solid. Polyethylene is used in numerous applications ranging from plastic grocery bags to heavy duty plastic containers.

Polyethylene, like all plastics, is a polymer based material, meaning that it is comprised of long chains of identical molecules. The polyethylene molecule specifically is comprised of two double bonded carbon atoms that each has two hydrogen atoms connected to it. Due to its repetitive nature, polyethylene can take many structural forms.

Polyethylene was first synthesized by Hans von Pechmann, a German chemist who discovered it by accident when heating diazomethane. It was not until 1939 that a purposeful method of production for polyethylene was introduced by Michael Perrin and production of the low density polyethylene variant was released for industrial uses.

Polyethylene has several desirable engineering characteristics. Polyethylene possess a crystalline structure and as such does not dissolve at room temperature. Also, polyethylene is extremely chemically resistant, making it perfect for storage of caustic materials and for use as chemical lab ware in research facilities. Polyethylene is also commonly used in situations when metallic materials are not desirable such as when corrosion due to dissimilar metals is an issue.

Given that it is highly resistant to chemical caustics and solutes, polyethylene remains a durable reusable material for countless plastic formed applications. Polyethylene also is recyclable and as such helps reduce landfill production and lower the materials costs of enterprise businesses and home consumers alike. Its versatility makes it a material that society uses extensively and would be hard pressed to find a replacement for.