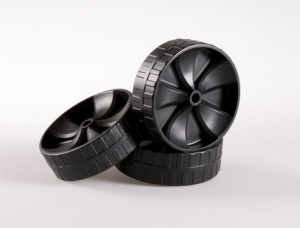 “Injection Molding at the Speed of 3D Printing”

Which is actually faster – injection molding or 3D printing?

According to Plastics Technology:

“Puzzlement was my first reaction when I saw this subject line on an emailed promotional message I received recently from Protolabs, the quick-turn “digital manufacturing” specialist based in Maple Plain, Minn. Everybody knows that additive manufacturing, or 3D printing, is slower than injection molding. Building (printing) parts takes several minutes to hours, depending on part size.

“My second thought was: How clever to turn my usual understanding on its head to make a point: Which process is faster—and what does “faster” really mean?

“One of the trends I have been following is the increasing productivity of 3D printing, often expressed in terms of the upper limit of run size for AM that is cost-competitive with injection molding. AM technology providers claiming to have pushed that upper boundary to the six-figure part range, largely through increasing process efficiencies and machine build areas to allow for simultaneous printing of larger numbers of parts—analogous to increasing the number of cavities in an injection mold. Still, the cycle times for 3D printing are at least an order of magnitude greater than for molding.

“So, you’d expect the AM industry to be itching to proclaim, in a future headline, ‘3D Printing at the Speed of Injection Molding.’ That would be news indeed.

“But in turning that formula upside down, Protolabs—which uses both injection molding and 3D printing, as well as CNC machining and sheet-metal fabrication—was making a point about what might be called ‘rapid injection molding.’

“The other thing ‘everybody knows’ is that 3D printing has the advantage over molding in much shorter lead times, because there is no need to design and build tooling, so part production can begin—at least in theory—almost immediately after downloading a CAD file of the part. The part production and finishing cycle time is the only lead time, apart from shipping.

“So Protolabs is rightfully proud of how it uses ‘digital manufacturing’ to compress the usual tooling-up cycle in order to ship injection molded parts ‘in 15 days or less.’ Depending on run size and part size, that may not be quite as fast as 3D printing can ship parts, but it’s catching up.”